Written In The Stars

Written In The Stars

Kenny Ortega
Written In The Stars is the 3rd episode of Season 5 on Gilmore Girls.

After Lorelai and Luke spend a romantic night together at Luke's place, Lorelai, walks into the dinner early the next morning dressed in one of Luke's flannel shirts, only to discover that the place is full of customers. Lorelai is a little offended when it appears that no one cares about their relationship, until it becomes a topic of heated discussion at the town meeting. Rory has an angry exchange with a haughty, rich student named Logan after he is rude to her friend Marty. Paris holds a wake for her older lover Asher, who died over the summer.

the best is yet to come | TONY BENNETT 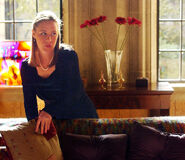 Lorelai – Don't be so puritanical. After all, Heather has two mommies

Luke – Your shoes work well with that shirt.
Lorelai – Gee, Carson, thanks.

Emily – The Farthingtons' dogs are apoplectic. Ridiculous choice of animal—a vicious 3-inch ball of hair and a bow—a ridiculous pink bow for the vicious killers. "Oh, watch out! Cecil Beaton and the Duke of Windsor are headed straight for my shoes!"

Paris – He had a heart attack. He was teaching a Shakespeare class—"A Midsummer Night's Dream." He was doing Puck, and then suddenly he wasn't. And the class was so into his reading, they didn't even get it. They thought he was acting. It was Dick Shawn all over again.

Paris – It'll be the Mountain Girl trial all over again.

Logan – What, they were out of Orlando Bloom?

Gypsy – You backed up. You didn't look. You got in, you turned on your car, and then you whipped out of that space like you were Lizzie Grubman