They Shoot Gilmores, Don't They?

They Shoot Gilmores,
Don't They?

Kenny Ortega
They Shoot Gilmores, Don't They? is the 7th episode of Season 3 of Gilmore Girls.

Determined to win the annual Stars Hollow 24-hour dance marathon, Lorelai (Lauren Graham) forces Rory (Alexis Bledel) to be her partner. While everyone in town dances around them, Rory and Jess (Milo Ventimiglia) can't seem to stop arguing with each other, a fact that is not lost on Dean (Jared Padalecki). Meanwhile, Lane (Keiko Agena) and Paris (Liza Weil) are both surprised when the boys they like drop by to see them.

in the mood | GLENN MILLER

i can't give you anything but love | JIMMY MCHUGH & DOROTHY FIELDS 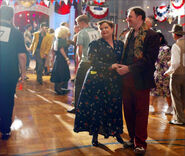 This story is about several couples who participate in a dance marathon. There are several exchanges of partners in the story. At the end, the heroine of the story wants to kill herself with a gun, but she cannot pull the trigger. Her dance partner agrees to "help" her by taking the gun and firing. When asked why he would agree to kill her, he says, "They shoot horses, don't they?" Choosing this title for the episode has an obvious connection to the dance marathon. Also, though, Rory has wanted to break up with Dean and go out with Jess for weeks, but she can't manage to "pull the trigger." Dean decides to put her out of her misery and do the breaking up for her.

Taylor – You would kick Tiny Tim's crutch out from under him, wouldn't you?

Lorelai – With a little encouragement, I could've been the Señor Wences of the vegetable set.

Lorelai – Miss Patty showed his wife a picture of me and she thinks I look like Elizabeth Taylor, which makes her Debbie Reynolds and him Eddie Fisher. He's no Eddie Fisher, trust me. Fisher Stevens, maybe.

Paris — Madeline... or may I call you Spicoli.

Rory – Jamie must be special.
Paris – Or Ted Bundy.

Paris – Theoretically, yes, but the second I mention a guy they’re gonna both start singing the theme from the Trojan Man commercial, and I just can’t take that, okay?

Rory – My mother, the Howard Roarke of Stars Hollow

Andrew – You went out with Liam Neeson?

Lane – No one asked for a Tony Manero wannabe to drop by.

Shane – Who are you, Bobby Brady? Get a life.

Jackson – Does anyone here understand that a man has a right not to have his personal life debated in a public forum? I'm not Winona Ryder.