Marita Grabiak
The Reigning Lorelai is the 16th episode of Season 4 of Gilmore Girls.

Lorelai goes underwear shopping. For a dead person. She's in charge of funeral arrangements for recently-deceased Gran, now that Emily has found Gran's decades-old letter telling Richard not to marry her.

The rift between Emily and Richard widens when he goes on a golf date with clients instead of accompanying his wife to the funeral of one of her oldest friends. Doyle goes on a theft and plagiarism rant. Trix dies suddenly and stricken with grief and guilt, Richard is inconsolable. Emily calls it quits on arranging Trix's funeral and drops everything in her daughter's lap after finding a letter in which her mother-in-law pleads with her son on the eve of his wedding to Emily to marry Pennilyn Lott instead.

Luke and Nicole have all of Stars Hollow listening in and reading lips as they quarrel. Worried about her parents, and frantic over fulfilling Trix's exacting requirements for her funeral, Lorelai has a meltdown while shopping for Trix's funeral underwear. After the service, cousin Marilyn regales family and friends with tales of Lorelai the First. Emily and Richard finally reach out to each other as he defies one of his mother's last wishes for the sake of his wife. 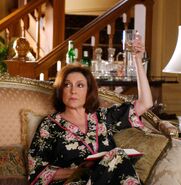 Rory – Snails?
Emily – Escargot.
Lorelai – A slimy thing by any other name…

Doyle – Can you say Stephen Glass?

Doyle – I'd rather not have Tobey Maguire playing me in a movie about the Yale Daily News scandal, thank you very much.

Doyle – Breeding ground for the next Jayson Blair!

Lorelai – Dad's got a Winona in the family? How cool. Who is it?