❝ Rory – I never stole a boat with Dean
Dr. – Dean?
Rory – My married ex-boyfriend who I lost my virginity to! ❞
— Rory in therapy

The Perfect Dress is the 11th episode of Season 6 of Gilmore Girls.

SHERILYN FENN ("TWIN PEAKS") GUEST STARS AS LUKE'S OLD FLAME — Feeling that he has missed too much and wants to get to know his newly discovered daughter April (Vanessa Marano, who does not appear in the episode), Luke goes to have a talk with her mother, his former girlfriend Anna Nardini (guest star Fenn). Meanwhile, Lorelai (Lauren Graham) sets a date for the wedding after finding the perfect dress, but she is worried by the nagging feeling that something is about to go wrong. Back at Yale, Rory (Alexis Bledel) happily moves into a dingy off-campus apartment with Paris (Lisa Weil) and Doyle (Danny Strong), and tries to avoid running into Logan (Matt Czuchry). However, when Logan shows up at her apartment and declares his love for her, Rory breaks down. 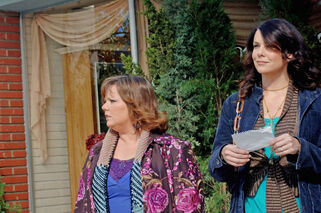 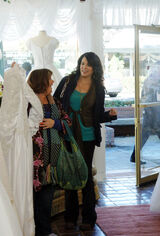 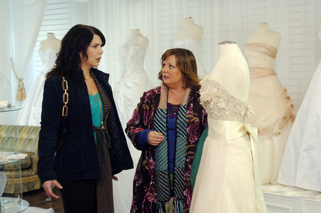 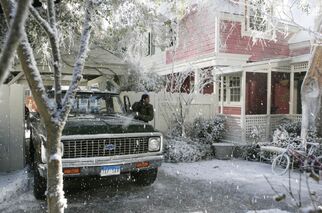 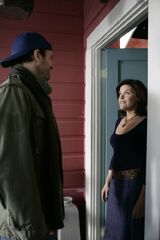 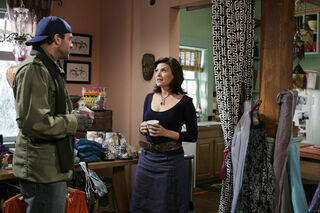 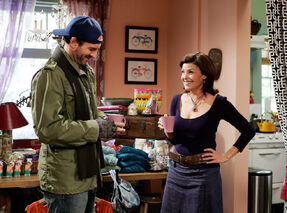 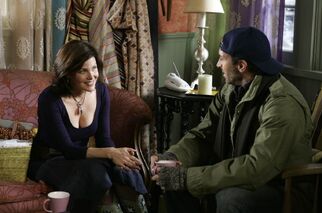 Lorelai – Okay, well, first of all, video poker is my calling. I think I'm totally gonna dedicate my life to it. Especially the third machine in the second row of machines as you hit the entrance of Trump Taj Mahal.

Lorelai – I must say I'm pretty proud of how quickly we got them and also of the fact that no one questioned us when we said our names were Wendy & Lisa.

Rory – But we wound up seeing Tony Danza, who was sublime.
Lorelai – Oh, the tap dancing.
Rory – Why Taxi never utilized his musical-comedy skills is astonishing.

Lorelai – Okay, Freaky Link. Hand me the vest. I will personally deliver it to the state. Okay? What's next on your agenda?

Paris – When we leave, we always keep the radio on, Rush Limbaugh of course, so they know we have guns in the house.

[Paris has a Noam Chomsky poster in the apartment.]

Lorelai – I think this is the one Divine turned down for being too over-the-top.

Mrs. Kim – I know Nigella Lawson when I see it.

Paris – Journalism is an art form, and the best art is created under repression, like Stalin's gulag.

Lane – That chair is two hundred years old. It's gonna have some nicks. It sat in James Madison's bedroom.

Lorelai – It's Sanford and Son.

Rory – Okay, King George, take a breath, eat a fry, and listen to me.

Anna – You would flip out if you saw a woman breast-feeding in public, you couldn't stand to watch diaper commercials, and you had an unnatural hatred of Macaulay Culkin.

Rory – Since I went all Frances Farmer in my psychologist's evaluation today.

Lorelai – Well, don't let them put you on any of those pills. Tom Cruise will be very upset.