Chris Long
The Bracebridge Dinner is the 10th episode of Season 2 of Gilmore Girls.

While Rory (Alexis Bledel) struggles to keep the budding rivalry between Dean (Jared Padalecki) and Jess (Milo Ventimiglia) under control, Lorelai (Lauren Graham) invites most of the citizens of Stars Hollow to an elaborate feast complete with Elizabethan costumes and horse-drawn sleigh rides, during which Richard (Edward Herrmann) announces to Emily (Kelly Bishop) that he has retired.

We open at the Stars Hollow snowman contest, and Lorelai and Rory have built a most unusual specimen. Rory is convinced they’ll never win, especially since some random guy has created the most elaborate over-the-top snowman ever. But that’s not really important. What is important is discussing what the girls are going to do on Rory’s winter break. Lots of movies are definitely in order. When Rory suggests renting The Godfather III on DVD, Lorelai is about to seriously question her daughter’s judgment until Rory points out that on the commentary, Francis Ford Copolla defends casting Sofia. A must hear! It’s not going to be all fun and games, though, because Rory’s got beaucoup work to do for the school paper. Leave it to Paris to ruin a perfectly good vacation. Then, the snowman’s head falls right off. And the Gilmore girls do what any self-respecting snowman builder would do: get coffee.

Over at the inn, Sookie is giving Jackson a hard time about his latest mushroom delivery. It’s all for some big, fancy dinner that will recreate the 19th century, i.e. tons of courses, costumes, and music. Of course, Lorelai and Sookie forgot to tell Jackson that he will be playing the part of Squire Bracebridge. He’s not down with that at all, but he doesn’t really have a choice here. Later, Chris calls and asks Lorelai if it’s okay if Rory stays with him for a couple of day for a nice father/daughter visit. Lorelai doesn’t know how she feels about it, but agrees as long as Rory is into it. At the Friday night dinner, Lorelai then finds out that her folks aren’t going away for the holidays. They usually go on vacation, but this time, Emily and Richard are staying put. Suddenly, Richard excuses himself from the table because he’s dealing with some major stress at work.

Meanwhile, Sookie is training the staff on how to speak Old English. She’s being a slave driver with everyone, except Jackson and the rest of the staff doesn’t appreciate it at all. Well, nothing is going to matter anyway because Lorelai interrupts to say that the Bracebridge party isn’t happening. The group is snowbound in Chicago. Sookie is devastated because she did so much preparation and now has tons of food with no one to eat it. She’s inconsolable. Until Sookie decides to serve the food anyway and invite everyone they know. They’ll have a Stars Hollow slumber party at the inn! Luke tries to get out of attending this little soiree, but he is obligated. The next day, Dean spots Lane and asks her if she’s going to the event. That’s affirmative. Now if only Lane could swing it without her mother in tow.

Lane bolts, leaving Dean to spot a big fight between Jess and some random kid in the middle of the school yard. Dean breaks up the fight and almost gets clocked by Jess. When Dean asks him why he kept swinging, Jess just said it was adrenaline that kept him going. Dean couldn’t look more annoyed as Jess just continues to piss everyone off just because he fees like it. At the Gilmore house, Rory is going through a bunch of holiday cards and finds one from her dad and his new girlfriend. Rory thinks the new girlfriend is pretty, while Lorelai compares her to Tammy Faye Baker. As Lorelai tries to assign rooms for all the guests, Rory suggest inviting Emily and Richard to try and lift their spirits. Lorelai opposes at first but relents from the pressure. Not to invite them would be bad karma.

The night of the big event arrives, and Lorelai and Rory greet all the guests as they arrive. Paris busts in to give Rory her homework, and Rory is nice enough to invite her to stay for the festivities. After Paris defensively explains that her alternate plans (reading The Iliad for the third time) is not pathetic, she accepts the invite. Later, when Jess arrives with Luke, Dean is less than pleased to see the local troublemaker. He tells Rory what happened with the whole fight, and Rory looks like she knows it’s going be a tough night. Lorelai emerges from the kitchen after calming down a crazed Sookie to find that her parents did indeed show up. But it’s not so bad because Richard’s dark cloud seems to have vanished. Emily doesn’t know why he’s in such a good mood but decides to just go along for the ride. Why ruin a good thing with pesky questions? When Lorelai goes to greet more guests, Rory spots Jess admiring some painting in the lobby. Rory looks at Jess, Jess looks at Rory, and then Rory turns away.

The night’s festivities begin with a big surprise. Everyone gets a ride in a horse-drawn sleigh before dinner. Of course, Jess has no interested in something so hokey, so he sits this one out. Luke tries to do the same, but Lorelai convinces him to take a ride with her. It’s quite romantic, despite Luke’s cynicism. The two talk about the town and then discuss taking care of Jess. Luke reveals that he has discovered the secret to parenting. And it’s this: you visualize the reality you want, and then you lie if necessary to bring it about. Lorelai thinks lying is bad and should be used only if you’re protecting your kid from physical harm. But Luke explains what he did and why. See, with winter break coming up, Jess has some time off. But his mom, Lizzie, never called or asked if Jess could come home for a bit. So, Luke lied and said that he was the one who insisted Jess stay with him for the break since Jess just arrived and is still adjusting. Luke seems pleased with his little lie until Lorelai informs Luke that Jess knows the truth.

When it’s Rory’s time to take a ride, Dean is off with his little sister, so Rory has to go on her sleigh all alone. That is, until Jess jumps aboard and invites himself along. Rory scolds him about the fight he had with Dean, and Jess is appropriately disinterested in her opinion. Besides the guy he was originally fighting with had it coming. When he names the guy, Rory agrees. Jess makes some comment about how the whole town is full of stupid people, which prompts Rory to wonder why he didn’t go home for break if he hates Stars Hollow so much. Jess says that his mom didn’t want him (Lorelai was right, he does know the truth.) The two ride through town and pass all the snowmen. Jess compliments Rory’s creation and tells her she should definitely win. It’s original, it’s got character, and the really good one is oh-so-overdone. Suddenly, Jess asks a super personal question. Namely, what do Rory and Dean talk about?

Because Jess is in a few classes with Dean and he just doesn’t seem to be Rory’s kind of guy. Rory is quick to disagree and say that Dean is exactly her kind of guy. All the guests return and sit down for their elaborate dinner. Richard is so impressed with everything. He tells Lorelai that he is really proud of her. Wow. Is Richard taking medication or what? The first course is served, Jackson performs his best Squire Bracebridge, Lane’s mom gets upset that nobody said grace, and Paris points out all the period inconsistencies. It’s just a blast. Surprisingly, it is Richard who is the bona fide life of the party. Finally, we find out why he is so happy. He has retired from his insurance job!

Later in their room, Lorelai and Rory discuss the night’s events and the fact that Richard and Emily didn’t say another word to each other. Then, Rory asks if her dad has called recently. Lorelai admits that he did call and invited Rory to visit for a few days. Rory can’t understand why her mom didn’t say anything about it. Well, she sort of understands. See, Lorelai feels threatened by the fact that Rory might spend part of the holidays with her dad and his girlfriend, who is practically Rory’s stepmother at this point. While Lorelai rants and raves, Rory remains calm and mocks her mother until Lorelai admits that she’s overreacting. And the bottom line is that Rory doesn’t want to go, but it was nice that Christopher asked. Suddenly, Emily knocks on the door and demands a new room. She can’t take being around Richard anymore. Emily is so upset that he quit without telling her, that she doesn’t even know what to say. So Emily camps out with Lorelai and Rory for the night. When Emily says it was totally irresponsible for Richard to do what he did, Lorelai responds that Richard’s job was killing him.

This comment strikes a nerve with Emily, so she gets up and goes for a walk. She runs into Richard in the lobby and he begs her to sit down and listen to what he has to say. He goes on to explain how he came to his decision. It wasn’t calculated at all, but when the time came to resign, Richard was never so elated in his entire life. A huge weight had been lifted off his chest. And suddenly he was smiling again. The reason he didn’t tell Emily was because she hates impulsiveness. And he couldn’t face the fact that he surely would be disappointing her. He wanted to keep being happy, especially around the holidays, so he didn’t say anything. Richard expresses how sorry he is and then reassures Emily that everything, financially speaking, will be okay. After hearing his speech, Emily just quietly says, let’s go to bed. In the morning, all the guests start to check out. Everyone had a fabulous time, even Richard and Emily. Dean and his little sister are on their way out when Dean spots something very disturbing. He sees Jess and Rory giving each other the eye. Is he losing his girl? At the end of the show, Lorelai and Rory take a sleigh ride home and see that somebody (Jess) has destroyed the super-duper snowman. This means that Lorelai and Rory have a good shot at winning by default. 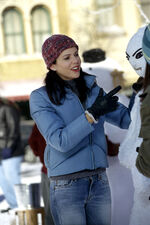 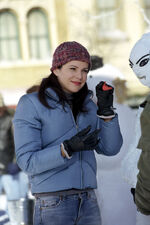 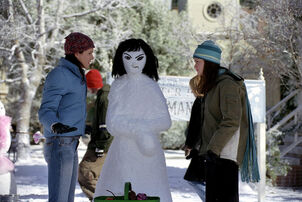 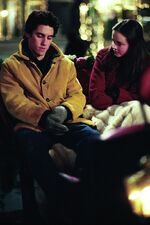 Rory – We're competing against the Michelangelo of snow.
Lorelai – And we're Ernest Builds a Snowman.

Lorelai – We're beyond crazy. We are 'Anne Heche speaking her secret language to God and looking for the spaceship in Fresno' crazy.

Morey – Charlie Parker was late to everything.

Rory – Hello there. Hey Clara. Nice, is that a Stella McCartney?

Sookie – No! It tastes too 20th century guys. It's gotta shout Washington Irving, not Irving my accountant. It needs something, help me. What is it?

Rune – Hey Chuck Mangione, you wanna back up a step?

Lorelai – They're the Old England Abbott and Costello.

Richard – I stood beside them and their boombox and I hummed Mozart's Prague Symphony as loud as I could.
Lorelai – A bizarro Battle of the Bands.

Lorelai – Like sands through the hourglass, so are the Gilmores of our lives.