View source
watch 02:56
Doctor Strange in The Multiverse o Madness - The Loop
Do you like this video?
Play Sound

Taylor Doose is a recurring character on WB drama Gilmore Girls. He is portrayed by Michael Winters.

Taylor is the owner of Doose's Market and Taylor's Olde Fashioned Soda Shoppe and Candy Store. He also runs the town meetings as town selectman[1]. He has a fussy manner and frequently acts as the foil to Luke Danes. He is the most politically powerful person in the small community of Stars Hollow, and much of the humor of the character comes from his overblown self-importance, and his troublesome initiatives as town leader. Taylor is also a member of the Town Beautification Committee. He has a niece, Bonnie, who works at Doose's Market and couldn't care less about her job. 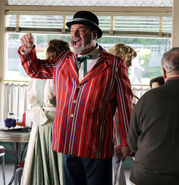