LORELAI BEGINS TO BOND WITH APRIL — Luke (Scott Patterson) decides to give April (Vanessa Marano) a birthday party at the diner. Lorelai (Lauren Graham) volunteers to help, and is hurt when Luke explains that he still thinks it's too soon for April and Lorelai to meet. However, Luke changes his mind when the party is a disaster, giving Lorelai a chance to bond with April while turning the party into a huge success. Meanwhile, Rory (Alexis Bledel) rushes to be with Logan (Matt Czuchry) at the hospital after he is seriously injured during a stunt with the Life and Death Brigade.

Lorelai wakes up with a brutal hangover and must now deal with the consequences of her drunken tirade during Lane and Zack's wedding party. Sookie informs Lorelai of her drunken antics from the night before. Thankfully, Miss Patty has been all over Stars Hollow telling the other townsfolk that Lorelai belted out "Endless Love" after drunkenly grabbing the mic. Rory visits Logan in the hospital and finds out (thanks to Paris) he will make a full recovery. All of the Huntzbergers are either unable (or unwilling) to visit the injured Logan, until Rory takes matters into her own hands. Luke hosts a birthday party for April at the diner but is unable to entertain them until Lorelai comes to the rescue. However, an angry Anna confronts Luke the next day over Lorelai co-hosting the party with him. Lorelai visits Anna at her shop to apologize for her role in the party. Anna tells her that she fears April will become attached to Lorelai and must set boundaries for her. 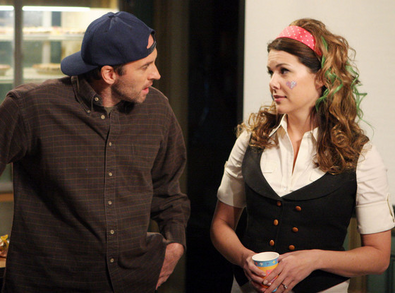 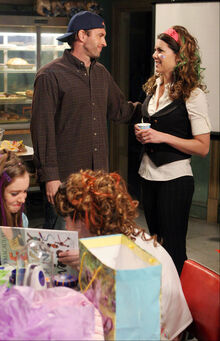 The episode title is a reference to the 2002 film 24 Hour Party People.

Sookie – Well, when you spotted the videographer, you got suddenly very excited to film your audition tape for America's Next Top Model.

Paris – Larry Summers is right, Rory. Our university system is crumbling. Did you know that?

Anna – It's a rave. Her friends call you Hagrid.

Lorelai – You could be up to your eyeballs in Mad Libs, Silly String, and malted milk balls.

Lorelai – Marcia, fabulous! You look like Sophia Loren!
Marcia – I was going for Vanessa Minnillo on MTV.

Lorelai – That's okay, I'm too old for Us Weekly. It never stopped me.

Lorelai: Yeah, I once went through a Sister Wendy phase myself.