Star-Crossed Lovers and Other Strangers

Star-Crossed Lovers and Other Strangers

Lesli Linka Glatter
Star-Crossed Lovers and Other Strangers is the 16th episode of Season 1 of Gilmore Girls.

Emily agrees to let Rory miss the weekly dinner so the teen can celebrate her three-month anniversary with Dean; Luke's former girlfriend visits the diner. Elsewhere, the townsfolk prepare for a festival that celebrates the founding of Stars Hollow.

The town of Stars Hollow is about to celebrate its founding with the annual Firelight Festival, which just happens to coincide with Dean and Rory's three-month anniversary. While the town prepares to honor its origins, Dean prepares a super-romantic evening with his main squeeze. He meets Rory after school and, even though she is clueless about the anniversary, promises an amazing night if she can manage to get out of the weekly dinner with her grandparents. Rory is unsure she shall be able to do it, but after some begging and pleading from Dean she agrees to try. At home, she enlists Lorelai as her ambassador, who calls Emily and makes the pitch. Surprisingly, Emily does not freak out, rather she gives Rory the night off. Lorelai, however, is still required to attend.

At Chilton, Tristin is kissing a random prep-school girl passionately, right in front of Paris' and Rory's lockers. Paris is pissed, Rory's disgusted, and Tristin just loves rubbing it in both their faces. Over at the inn Sookie and Jackson cannot seem to keep their paws off each other either. Even Michel is whispering sweet, French-accented things into the phone to an unknown and unseen paramour. This does not make Lorelai feel vert wekk.

Meanwhile; the town is bustling with people and decorations. So much so that Lorelai almost gets clocked with an oversized, decorative star. It puts her in a bad mood, and Luke seconds her emotion. He and Lorelai commiserate until a beautiful woman walks through the door, leaving Luke almost speechless. It is Rachel, his ex-girlfriend. An awkward silence occurs until Luke breaks it, and there is some idle chit-chat until Lorelai is forced to introduce herself and then proceeds to feel totally inadequate because while Lorelai runs an inn, Rachel just returned from the Mid-East, chronicling how the violence has affected Palestinian and Israeli families. Lorelai rambles, as she does in uncomfortable situations.

At home, Lorelai is all worked up about the meeting with Rachel and just hates herself for babbling like a moron, as she puts it, earlier. She cannot stand that Rachel and Luke were gazing at each other like long lost loves. She admits to Rory that she totally misses Max and with all the excitement going on (seeing Christopher, etc.) she has not really had time to let the breakup sink in. She even dreamt about Max the other night. Sigh. But Lorelai refuses to dwell and instead helps Rory get ready for her big night.

Later, Lane stops by and is freaking out over her mom's latest set up. Lane is not only meeting a new guy her mom approves of, but seeing his whole family; fourteen future Korean in-laws. Rory has little time to sympathize. Dean arrives, and she runs off for her super-romantic date. Lorelai heads off to Hartford for dinner alone with the folks. When she gets there, Lorelai finds herself alone with Richard for a few minutes and ends up rambling nonstop out of total awkwardness. They never really resolved last week's debacle with Christopher's parents. After stringing several sentences together in a way only Lorelai can, Richard tells her to stop, sit, and not talk. And then to Lorelai's utter horror, a single, suited man, Chase Bradford, enters the house, and he is clearly meant to be a date for Lorelai. Emily plays it off like a total spontaneous thing, but they all know it is not in any way spontaneous.

Lorelai drags Emily out of the room for forty lashes and now understands why she was so generous and congenial when Rory wanted out of dinner. Emily feels she has done nothing wrong and asks Lorelai if it would kill her to keep an open mind. After all, think about this: Tonight Rory is celebrating her 3-month anniversary. When is the last time Lorelai had a relationship that lasted that long? Ouch.

Back in Hartford, Lorelai's dinner date is not going so well. Of course, Lorelai's wit does not gel with Chase's square personality. He is an actuary, a profession that is all numbers, zero thought or creativity. Chase could not be more wrong for Lorelai. He is even boring Richard. Emily, on the other hand, is eating it all up, laughing at the bad jokes in the hopes that he and Lorelai will hit it off. Of course, Chase is digging Lorelai big time. Essentially, the only thing for her to do is try and escape. She bails to her room, grabs her coat, starts to sneak out of the balcony and is busted by Richard. But he does a totally un-Richard thing, he lets her leave without saying a word to Emily. Maybe Richard has a soft spot for his daughter after all.

Back with Rory and Dean, he brings her to a salvage yard to present her with his gift, which is the beginning of a car that he plans to build for her, piece by piece. Rory is overwhelmed. This has got to be the single greatest thing anyone has every done for her. She gets behind the wheel, he slips into the passenger seat, and they kiss over and over, and Rory states that this moment is so perfect, it just might make her sad because nothing could ever be this good again. Then, Dean puts what he believes is the icing on a very romantic cake. He tells Rory that he loves her. And the silence that follows is deafening. There is a look of shock on Rory's face and Dean is devastated. Does not she love him? She says she needs to think about it, but he says there is no need to think about it; she either feels it or she does not. And now he feels like a total idiot. Rory tries to explain her point of view, but nothing matters now. Dean just wants to go home. An awful end to what was a perfect evening.

Back at the festival, Lorelai walks around alone, Sookie and Jackson have a really nice time, and Rachel takes pictures and hangs with Luke. Poor Lane walks around with fourteen Korean people.

Finally, Luke demands to know why Rachel is really here. She missed him, simple as that. But she does have a tendency to leave, so how excited can he really get? Rachel wants to know what is going on between him and Lorelai. All Luke says is that they are friends and that is it. And to change the subject, Luke admits that he is really happy to see Rachel, even if he does not show it. Then Rachel goes to grab some punch, giving Lorelai a chance to chit chat with Luke, and bicker, and flirt (like they always do). So is Rachel staying? He does not know. Does he want her to? He does not know. But maybe he will to make it work with her, you know, stop analyzing and just go for it. Luke goes to find Rachel, leaving Lorelai alone again.

When she gets home, Lorelai dials Max's number and gets his machine. She does not get the chance to leave a message, though, because Rory walks in, tears on her face and announces that she and Dean just broke up. 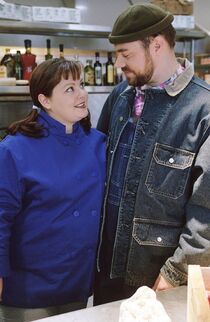 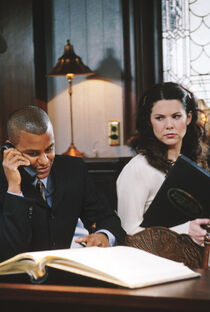 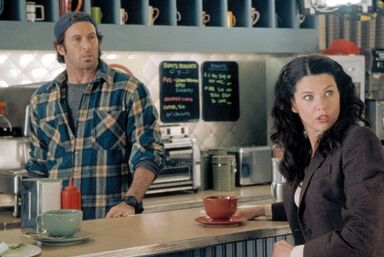 Miss Patty – Who wants to hear about the time I danced in a cage with Tito Puente?

Lorelai — I wanna arrange things on a plate so they look like a pretty little hat. I wanna be the Iron Chef!

Paris – What a shame Elizabeth Barrett Browning wasn't here to witness this. She'd put her head through a wall.

Chase Bradford – I'm no Kreskin.
Dean – You always bring a book with you and I was just wondering: what's the 3-month anniversary book?
Rory – Actually, I brought the New Yorker.
Dean – A magazine! Really?
Rory – It's the fiction issue.