The sum of its parts was definitely greater than the season whole as Gilmore Girls kicked off its fourth year by separating its high-powered mother-daughter duo. After years of toil at snooty private school Chilton, Rory was finally off to the greener pastures of college as she began her first year at Yale. The not-so-long distance put a crimp in her relationship with her mother, Lorelai, as the two were forced to continue their chatty conversations via phone--not exactly the same as trading barbs face-to-face.

While Rory adjusted to college life with cranky roommate Paris in tow, Lorelai found herself without a daughter but gained a boyfriend in the form of Jason "Digger" Stiles, a childhood acquaintance and now her father's business partner. But the lure of Stars Hollow, the Gilmores' cherished country town, would prove too hard to resist as Lorelai finally made plans to open her own inn and the two ladies found themselves attracted to town residents--for Lorelai, an intensifying of her friendship with diner owner Luke and for Rory, a return to old boyfriend Dean, which put a decided tension into the show.

SPECIAL APPEARANCE BY
The Shins ("Girls in Bikinis, Boys Doin' the Twist") 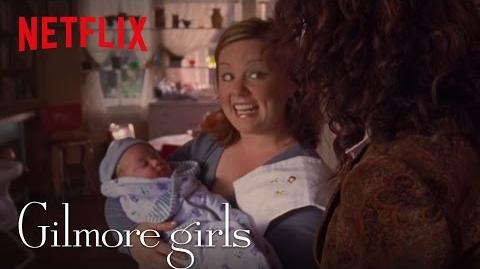