Scene in a Mall

Scene in a Mall

❝ Zack – When the Sex Pistols roomed together, no way did they have a night light
Brian – You don't know that ❞

Scene in a Mall is the 15th episode of Season 4 of Gilmore Girls.

Conspicuous consumption. Hurt that Richard spends so much time on business, Emily hits the mall, dragging Lorelai and Rory in her wake. Plus: Lane moves into an apartment with her band mates. 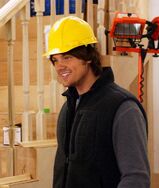 Lorelai – It's just when I picture letter writing, I picture Charles Dickens.

Rory – How very The L-Word.

Lorelai – No, I didn't, because our once-wonderful relationship -- envy of all the world, more intimate than that of the naked couple in the "love is..." cartoons -- has degenerated into e-mail correspondence.

Christine – I love the floorboard thing! It's so Hogan's Heroes.

Christine – I thought my mom was harsh, but your mom makes the guy from Joy Division look like one of the Teletubbies.

Lane – I'm not Yoda. So if you're looking for a mentor, call the Dalai Lama.

Lorelai – This is the least amount of fun I've ever had, barring the time we went to Mummenschanz.

Lorelai – "Emily the Strange" with the black cat and the boots made for kicking.

Lorelai – Me wants them! My precious!!