Partings is the finale and 22nd episode of Season 6 of Gilmore Girls.

LOVE TAKES A PAINFUL TURN FOR BOTH LORELAI AND RORY AS STARS HOLLOW IS INVADED BY TROUBADOURS – Stars Hollow is suddenly overrun with troubadours when news gets out that the town's regular street performer (Grant Lee Phillips) has been discovered. On the evening of Logan's (Matt Czuchry) graduation from Yale, Rory throws him a wild party, but the knowledge that he is being forced to leave for London the next day makes their time together bittersweet. Meanwhile, at a Friday night dinner, Emily and Richard attempt to set Christopher (David Sutcliffe) up with an attractive young woman (guest star Melora Hardin). Finally, Lorelai decides she was wrong to let Luke postpone their wedding for so long and delivers a tearful ultimatum.

Lorelai wakes up at Sookie and Jackson's place and is now trying desperately to avoid Luke. Logan graduates from Yale, with both Rory and the Huntzberger clan in attendance. Taylor must deal with a bevy of street musicians who have descended upon Stars Hollow now that the town troubadour has left after striking a record deal. The dejected singer returns only to find that his turf has been overrun with musicians. At Friday night dinner, Emily tries to set up Christopher with a comely psychologist named Carolyn, but he has no interest in her and asks Lorelai to bail him out. At the evening's end, Lorelai pours her heart to Carolyn, discussing her relationship woes with her. It's Logan's final night in the U.S., and Rory throws a Britain-themed party for Logan, complete with a look-alike of Her Majesty, cardboard cutouts of Big Ben and the Buckingham Palace guards, and an appropriately styled Rory wearing wearing knee-high go-go boots. Rory and Logan discuss their relationship as he prepares to depart for England. They share an emotional good-bye the next morning right before Logan heads to the airport. The episode concludes with a frantic Lorelai confronting Luke about their wedding date. Lorelai, distraught, shows up at Christopher's door and spends the night with him.

‶And the crazy thing is, I am ready to get married; I am ready to start the next phase of my life, I want another kid″
—Lorelai to Carolyn

last train to clarksville | THE MONKEES

the story of yo la tengo | YO LA TENGO

what a waste | SONIC YOUTH 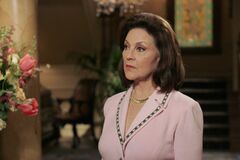 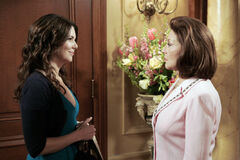 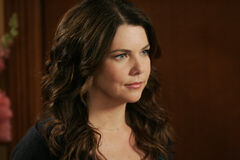 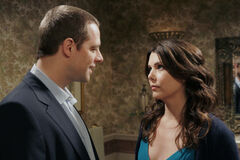 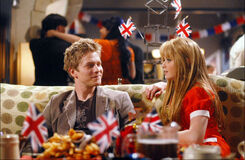 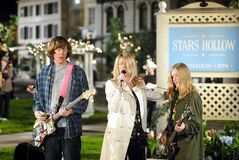 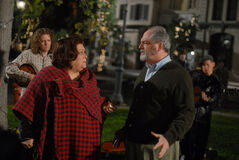 Logan – Yo, Alfred Stieglitz! Stop with the pictures.
Rory – I prefer Cartier-Bresson.

Logan – I'm taking that Stalin biography away from you.

Troubadour – Can you say "BTK?"

Lorelai – Kimmy saw this guy at the mall who was a total Chachi, and he bought us a slurpee, and we totally lost track of time.

Rory – I made reservations at this crappy Italian restaurant with Chianti bottles hanging from the ceiling, and the husband and wife that own the place wind up screaming at each other after 8:00. We love it!

Miss Patty – You know, half the time people speak to me, I'm thinking about Baryshnikov. Did you see Turning Point?

Emily – It's so important to find someone who can make you laugh. I was always so envious of Johnny Carson's wives. I just thought these women must do nothing but laugh all the time.

Lorelai – You're talking about Emily Dickinson, right? 'Cause Emily Gilmore was made to do this.

Lorelai – Lynnie, as a psychologist, tell me what do you think of The Sopranos?
Carolyn – Actually, I miss Adriana.

Emily – The way he was going on about that motorcycle of this. I half expected him to start talking about his Tonka truck and announcing to the room he wanted to be a fireman or a cowboy someday.

Lorelai – For months now, I've been skulking around not saying anything, not having an opinion, like I'm Clarence Thomas or something, and I … I'm done with that.

Rory – I keep trying to think of fabulous things to say, but all I can think is, "Say 'Hi' to William and Harry for me."