Norman Mailer visits the Dragonfly Inn and is testing Sookie's patience. Rory does research on the Life and Death Brigade for the Yale Daily News, which leads her right back to Logan Huntzberger.

Everyone at the Yale Daily News spent their summers doing internships and being published in The New York Times and Rory panics in fear she hasn’t done enough for her career. Logan Huntzberger arrives after the assignments have been handed out and when Rory asks Doyle why he is letting Logan get away with not doing anything, Doyle informs her it’s because Logan is the son of Mitchum Huntzberger, the newspaper magnate. Rory is thrilled to have the features beat and decides to write about illegal music downloading. While trying to conduct a ground breaking interview with a fellow Yale student, she realizes it’s a dead end. While in the bathroom a girl walks in wearing a gorilla mask and a ball gown. Rory follows her outside, where the girl shouts in Latin before getting into a black SUV. Rory does some research and finds out the Latin phrase is the motto for a secret society at Yale called the Life and Death Brigade. Doyle tells her that everybody knows the society exists, but nobody knows that it does. Rory decides to change her article to undercover the truth about the club and in the course of late night research she discovers that Logan’s grandfather was in the society. Assuming that membership follows family lineage, Rory questions Logan about the Life and Death Brigade. He denies any knowledge, but instant messages her the next day in the newspaper office to tell her he can get her on the inside to write her article.

Back in Stars Hollow, Lorelai receives a desperate phone call from Christopher. Gigi won’t stop crying, Sherry isn’t home and he doesn’t know what to do. Lorelai races to Boston to help out and after getting Gigi quiet Chris says Sherry took a job in Paris, leaving him with their daughter. He thinks he can’t raise her alone, but Lorelai says he can and he will because he has to. Norman Mailer is at the Dragonfly Inn and is annoying Sookie because he sits for hours without ordering anything but iced tea. Sookie becomes more irritated when the Dragonfly’s financial adviser suggests they drop lunch because it’s not making any money. Lorelai can't figure out what's up with Sookie. The girls arrive for Friday night dinner and the maid says Richard is out of town and Emily is at a function. Lorelai decides they should order pizza and eat it on the floor in the living room. After getting comfy Lorelai tells Rory about Christopher and says she plans to go back and help him with Gigi. Rory goes to Christopher’s a few days later and tells him she doesn’t want him to call Lorelai anymore because she’s in a relationship now and she doesn’t want him to mess it up. Lorelai finally has to confront Sookie when Luke calls, upset, because Kirk is in front of the diner handing out flyers to promote lunch at the Dragonfly. Sookie goes into the dining room and yells at Norman Mailer, telling him it’s all his fault. Lorelai drags her away and Sookie says she doesn’t know why she’s freaking out. Suddenly, she realizes she’s pregnant. She runs back out to the dining room and tells Norman Mailer in excitement. At the end of the episode Lorelai goes to the diner and asks Luke why he’s crabby. He nods to a table and complains that a couple of guys are sitting for hours and only ordering iced tea. 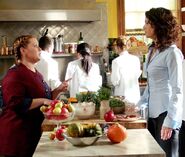 Paris – We could end up like the Van Burens
Rory – As in Mr. and Mrs. President?
Paris – As in Abby and Ann.

Doyle – It is amazing. It’s absolutely amazing that I spent all summer in Indiana working my ass off for The Muncie Messenger, and you went from Star Trek Convention to Boba Fett Fan Club Symposium, and yet, lookie here. The New York Times. Isn’t that great, Rory? Aren’t you seeing how great it is?

Glenn – Whatever. Oh man, it’s R.W. Apple again. God, does he have anyone else to talk to?

Doyle – Oh. That’s a great way to look at it. Thank you! You know, it’s because of me that he’s going to be Bob Woodward

Rory – I already have a ton of data and pages of research and, oh, the best thing is, Nancy, this girl on the fourth floor, her father was the guy who ran security at the gallery when Lars Ulrich sold all his art and he said he would try to get him on the phone for an interview and I've gotta breathe now

Rory – Well it was nice knowing you.
Dean – Way to Stand By Your Man

Paris – Okay. I'll be back late. If Rabbi Feldman calls, tell him I got the stats from Edward James Olmos' office, so I'm good. Bye.

Sookie – This is all Norman Mailer’s fault. He just sits around, ordering nothing and yammering on and on and on. I mean, so he was married to Marilyn Monroe. Who wasn’t?
Lorelai – That was Arthur Miller

Lorelai – How long ago did Axl Rose leave?

Lorelai – Yeah, until her hair grows long enough for the prince to shimmy up

Christopher – No, you’re different, I mean, you’re special. You’re stronger. You’re like a superhero with red boots and a golden lasso

Lorelai – Hi, we should be on the guest list. Halston and Liza are expecting us

Retrieved from "https://gilmoregirls.fandom.com/wiki/Norman_Mailer,_I%27m_Pregnant!?oldid=36168"
Community content is available under CC-BY-SA unless otherwise noted.