‶Try a plum, they're better than sex!″
—Miss Patty to Rory[src]

Miss Patty is a supporting character on WB drama Gilmore Girls. She is portrayed by Liz Torres.

Miss Patty owns and runs a dance studio in Stars Hollow and had a career in show business as a dancer, when she was younger. She is a notorious gossip who frequently shares information with Babette Dell among others. Often married, often divorced dance instructor. She often makes name-dropping references to her past as a dancer and singer; how much of it is true is unknown.

She's usually seen lusting after young men that she wished she could marry again. She and Babette know most of the gossip of the town, though Babette mentions that Patty normally gets the town gossip before her because her phone intercepts other people's phone calls. After (or perhaps even before) Taylor, she seems to be the most influential citizen of Stars Hollow. Her dance studio is used for town meetings, among other community events. 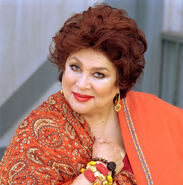 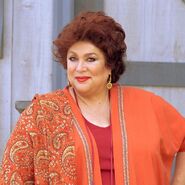