Marty is a recurring character on WB drama Gilmore Girls. He is portrayed by Wayne Wilcox.

Marty is a friend of Rory Gilmore and fellow Yalie. He works several jobs while in school to make ends meet. Marty has an unrequited love interest in Rory. He exits in the middle of season 5 after confessing his feelings to Rory only to be rebuffed, but then he returns in season 7 as Lucy's boyfriend. As Lucy's boyfriend, he pretends he doesn't know who Rory is, causing tension between Rory and her new friends when it is later discovered.

Marty is first seen when Rory arrives early for a class during the first week of classes at Yale. Rory later has an incredibly awkward encounter with him outside her dorm room late at night when she sees him passed out naked on the hallway floor. Marty fears he will be referred to as "the Naked Guy" in college. Rory tries to assure him that she believes no one may have seen him since it's been quiet for awhile. She then offers him her robe, and he returns to his room.[1]

Rory and Marty see each other again when Marty invites a disheveled and highly embarrassed Rory to eat breakfast with him and his friends who have dubbed themselves "The Breakfast Crew." Marty stated that seeing Rory in such a state makes them even in reference to their first meeting, but Rory retorts that being naked in the girls' hallway is worse than being disheveled in the dining room.[2]

After meeting up randomly at the Harvard-Yale game, it's revealed that Rory told Lorelai about 'The Naked Guy' and once Richard joins the conversation, Rory's mortified on Marty's behalf only for Richard to reveal his own month of Yale nakedness, prompting Marty to bid Richard adieu as Obi Wan. Marty is also the only boy interested in Rory that Richard takes a genuine liking to.[3]

Returning from summer break, Marty tells Rory of his discovery about his real father. Marty and Rory are walking on campus when they run into Logan Huntzberger, whom Marty introduces to Rory. Marty sometimes tends bar for Logan's parties and Rory doesn't like the way Logan speaks to Marty like he is above him. Later, Rory runs into Logan, and she berates him for the way he spoke to her friend.[4] Marty and Rory develop a natural, close, seemingly platonic friendship as Rory feels comfortable enough to fall asleep while studying on his bed.

To the audience, however, Marty's feelings of more than friendship for Rory are obvious, but he respects her. However, Marty's secret feelings for Rory begin to affect their friendship when he realises that Logan is interested in Rory, and suspects that she may feel the same way about Logan. Marty's frustrated to the point that he refuses to take a cab back to the dorms with Rory after helping her, calling her naive for not seeing it herself.[5] After being apart a while, Rory realises she misses Marty and invites him over for a super themed (Lorelai style) Marx Bros. marathon and Marty agrees, hoping he might have a chance to tell Rory how he feels.[6]

Unfortunately, Logan arrives home early and surprises Rory (and Marty) when he shows up at her dorm to invite Rory out for dinner with his friend. The invite is then extended to a suddenly uncomfortable Marty who reluntacly agrees to tag along. At the dinner, Marty is highly embarrassed when he realizes he cannot afford to foot his part of the bill, and despite Logan's offer to cover for him, he rushes out of the restaurant to look for an ATM. Rory follows him, and he tells her he knows he still won't have enough to cover it. He reluctantly accepts Rory's offer to pay for him, and he can pay her back later. Marty finally admits how he feels about Rory, but she says that she likes Logan and adds, 'I don't know why'. Marty leaves.[6]

Marty doesn't appear again until "French Twist" when it is revealed he is Lucy's hard-working boyfriend (Lucy constantly referred to him in conversation as 'Boyfriend' so Rory didn't know it was Marty prior to seeing him). When Rory sees him with Lucy, he tries to play it off like this is the first time they've met which throws Rory off. When Rory asks him why, he says he thinks it'd be weird if Lucy knew they were once friends. Despite her confusion, Rory follows his lead and doesn't tell the truth to Lucy. In 7.09, Marty bartends for Lucy's birthday party, and he and Rory seem to smooth things over as he concocts a unique drink for her. After the booze is all gone and he closes the bar down, Marty joins Rory on the couch, and he tells her she is still as beautiful as ever, making Rory uncomfortable and she tells him to go be with Lucy. He then joins Lucy.

In the next episode, Marty, Lucy, Rory, and Logan go to dinner together. When Lucy asks Logan how he and Rory met, Logan honestly answers that it was Marty who introduced them. He says the two have been friends since freshman year, and a confused and betrayed Lucy leaves the dinner. Marty goes after her. Logan admits to Rory that he couldn't lie to Lucy because she's a nice girl, but also because he was a little jealous. After Lucy forgives Rory, she tells her that she and Marty have broken up. What becomes of Marty is unknown after this. 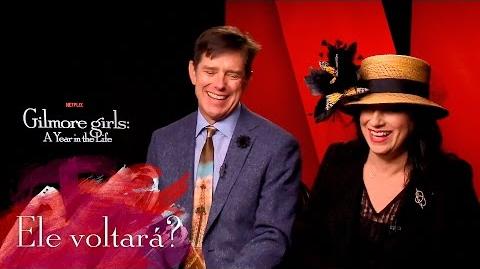