View source
watch 01:43
Gilmore Girls Lore: The Story of Lorelai and Luke
Do you like this video?
Play Sound

1st – Written in the Stars to Say Something
2nd – So... Good Talk to Partings
3rd – Bon Voyage to present

Concert Interruptus
That Damn Donna Reed
Raincoats and Recipes
Written In The Stars
A House Is Not a Home
New and Improved Lorelai
The Prodigal Daughter Returns
Just Like Gwen and Gavin
Partings
To Whom It May Concern
Bon Voyage
Fall
Lorelai? Lorelai?

❝ Lorelai – You're like Willy Wonka, but hotter
Luke – I am not hotter than Willy Wonka[1] ❞

Lorelai and Luke is a relationship on Gilmore Girls, portrayed by Lauren Graham and Scott Patterson.

Luke and Lorelai meet due to - of all things - Lorelai's need for coffee[2]. They become friends a few years later and have a bantering relationship, mostly based on Luke providing Lorelai and Rory Gilmore with food and coffee – according to Lorelai whenever somebody brings up romance and Luke in the same sentence.

Eventually, the two start dating and both seem to experience, for the first time in their adult lives, a real, committed relationship with someone they love.

Although Lorelai is perhaps Luke's Diner's best customer, Luke and Lorelai's relationship is platonic for many years. At first Luke is just "the guy that pours her coffee". However, he is consistently there for her as a loyal friend and Rory's surrogate father, while admiring Lorelai from behind the counter. Lorelai and Luke's friendship goes way back to before the series began. When Lorelai and Rory first moved to Stars Hollow, Luke was one of the first people they met when Lorelai, frantic for coffee, harangued a busy Luke until he gave her some coffee.

Luke is presumably attracted to Lorelai from their first encounter as it is discovered that he has kept a memento from their meeting years later; the hand-written Scorpio horoscope stating "You will meet an annoying woman today, give her coffee and she will go away" that Lorelai gave to Luke eight years earlier is brought out and mentioned during their first date, and signifies Luke's commitment to their relationship.

During the end of season one, things become more than just friendly between Luke and Lorelai, after relying on Luke for support during Richard Gilmore's health troubles at Christmas and when Rory's school project goes amiss, Lorelai begins to question how close they have become. Just when things seem to be going somewhere, Christopher Hayden shows up in Stars Hollow looking to have a closer relationship with Rory.

Their relationship becomes serious towards the end of Season Four. The first step is taken by Luke after he listens to self-help tapes on how to love and recognize the woman you want. Lorelai is impressed by the change and both surprised and flattered. They date for a year before Lorelai, after losing contact with Rory over a major disagreement, is so deeply touched by Luke's dedication to her and Rory that she makes a wedding proposal to Luke. He accepts instantly and they begin expanding and renovating Lorelai's two-story home.

The wedding date is postponed until Lorelai reunites with Rory. However, Lorelai senses hesitation in Luke when she begins planning the wedding. April Nardini, Luke's secret source of hesitation, is a daughter that Luke unknowingly conceived in a previous relationship with Anna Nardini. Lorelai discovers that Luke has been hiding knowledge of April's existence (although he had tried to tell her but the moment never seemed right), and they eventually postpone the wedding again in order for Luke to be able to concentrate on building a relationship with his daughter.

Adding to Lorelai's doubts and fears over their relationship, Luke requests that Lorelai have no contact with April. Lorelai respects his wishes until he requests her aid in planning April's party. Unfortunately, Anna disapproves and adds to Lorelai's doubts over her and Luke's relationship. Lorelai eventually grows impatient and resentful towards Luke for making impossible demands of her and putting their lives on hold for so long. Having had avoided him for some time, she finally gives Luke an ultimatum—elope with her and get married now or never—to which Luke's inability to answer ends in Lorelai's departure, possibly from the relationship entirely. Lorelai, hurt and distraught, goes to Christopher for comfort and, after waking up in Christopher's bed, leaves the next morning looking guilty and disgusted with herself. Luke appears on her porch the same morning, his truck packed and with plans for their elopement and marriage. Lorelai is forced to tell Luke that she slept with Christopher last night. Luke says nothing but drives away.

At first, Lorelai and Luke remain somewhat detached but supportive after their break up. Lorelai avoids his diner and Luke until he asks Lorelai for help with April's appendicitis. At the hospital, Luke discovers that Lorelai has married Christopher. He later asks her for a character reference in order for him to win a custody battle with Anna over April. He comes to Lorelai's aid when Richard is in the hospital and Christopher is missing in action. Eventually, after Lorelai's divorce from Christopher, they have a discussion about their relationship in the maze made of hay during the Stars Hollow spring break festival and both apologize for their mistakes. Later in Lorelai? Lorelai? Lorelai shows her love to Luke by singing "I will always love you". In the end, after coming through for her and Rory on many occasions - the most relevant being the one depicted in the finale where Luke organizes a big "bon voyage party" for Rory before she leaves Stars Hollow - Lorelai and Luke return to each other.

Lorelai knows Luke is the one for her and that she can depend on him to always be there for her and Rory. In the final scene at the diner, Rory notices that Lorelai is wearing a necklace that she's never seen before. We learn that the necklace has just been given to her by Luke after a reuniting kiss in front of the diner. Rory remarks on the necklace and Lorelai, while saying she loves it, looks behind her to where Luke is standing. He later enters the frame and asks the Gilmore girls what they want from the menu. Lorelai tells him she needs some time to think to which Luke responds, "Take all the time you need". This becomes an obvious indication that she and Luke have spent some moments together off-screen discussing their future. Having learnt from their own experiences that being hasty brings nothing but trouble, the couple are reunited and decide to finally settle down and have a serious relationship.

Later on, in the Gilmore Girls revival, we learn that Luke and Lorelai have had a stable relationship over the past decade yet they have not wed. Emily refers to them as "roommates" while Lorelai refers to her and Luke as "partners." Lorelai begins to become detached from Luke and he feels as if Lorelai is preparing to leave him. In the episode "Fall," Lorelai "does Wild" (the book, not movie) to clear her head. She doesn't actually hike the trail but she does have a realization, that she and Luke should get married. She goes home after ditching her backpack and finds Luke in their kitchen. Lorelai tells Luke she needs to talk to him but Luke insists they don't because he feels as if he knows what she's about to say, she's leaving him. Luke tells Lorelai that he will never leave her and she is the only thing he needs so he begs her not to leave. Lorelai comes out and tells him she thinks they should get married. Luke, stunned and happy goes and gets the ring for Lorelai that they had back in their previous engagement. They plan the wedding and the night before, they're having pizza when they decide that they don't want to wait 10 hours. It's bingo night so the reverend is up late. They wake Rory and see what Kirk laid out. It was perfect, a fairytale. They tied the knot that night and hold the wedding the next day. 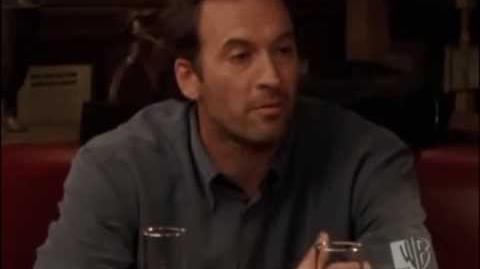 How Luke and Lorelai met