View source
watch 01:33
Wiki Targeted (Entertainment)
Do you like this video?
Play Sound

Lorelai Gilmore I, nicknamed Trix by her loving son, Richard Gilmore, was born on May 4, 1917[1]. She married her second cousin, Charles Gilmore, and after she was widowed, moved to London, England. As she did not like to travel (anymore, as she travelled in her youth), Richard and Emily would go visit her yearly in England. Trix returns to the States in 2001, for the first time in 20 years[2] and decides to move back to her home in Hartford in 2003, as her health deteriorates.[3]

Trix is a character, very adamant that things be a certain way (her way), and often times rude in her responses to her family – although most obviously with Emily. Like Richard, she is stubborn, unsentimental, but unlike Richard also very direct in her opinions eg. in relation to Lorelai's life, and is also not averse to bestowing compliments upon her granddaughter.[2][3] However, she and Richard do seem to have similar ways of retorting in conversation[4].

She is very fond of Richard and impressed with Lorelai, despite commenting on Lorelai's having a child 'out of wedlock'. She never liked Emily and interactions between the two are frequently riddled with snide comments from Trix towards Emily, which Emily suffer with growing contempt.

Trix is first referenced in episode 3 of the series, "Kill Me Now", in which Emily and Richard make it appear she is no longer living. She makes her first appearance the next year and her dislike for Emily is readily apparent. She criticizes her throughout much of the episode, while considering her son, Lorelai, and Rory with admiration and approval. When Lorelai reveals that she is borrowing money from her parents to pay for Rory's education, Trix offers to give Rory her trust fund. Emily then interferes, making Lorelai question this decision, claiming it may destroy the relationship she has with her daughter. After witnessing an argument between Emily and Lorelai, Trix withdraws this offer, calling the two women too immature, which she says Lorelai gets from Emily. She then leaves, and Emily and Lorelai reconcile.

Trix reappears during Richard's 60th birthday. As with her last visit, she wastes no time criticizing her daughter-in-law. Trix makes dinner arrangements at Lorelai's inn after looking over her house, of which she disapproves (only implied by her reaction, but she doesn't say anything to Lorelai about this). During the dinner, she announces she'll be moving back into her own home near the Gilmore Mansion, much to Emily's dismay. At this, Emily takes advice from Lorelai and uses her daughter's rebellious tactics to annoy her mother-in-law.

In the following episode, Emily mentions that Richard is helping her close down her house in London. In the episode Swan Song, Emily talks about dealing with Gran after she and Richard have returned. She goes on to state that Gran will be at Rory's graduation (which she is not). She soon moves in with Richard and Emily, due to her faltering health and drives Emily crazy, even kicking her out her home so she can ready for a meeting.

When Emily returns, she finds her making out with a man in a jogging suit. Lorelai tries to convince her not to reveal the secret, but after Trix insults her again, Emily, as Lorelai tells Richard later that same evening, "snaps" and uses the information to humiliate her in front of her son and friends. Emily later, for the first time in over 35 years, has a heart to heart with Trix, and Trix decides she and Emily must have tea, but this doesn't affect their future relationship. Lorelai convinces Richard to, for the first time, not take sides with his mother, who, as Lorelai states tend to be fairly rough on Emily, while she always dotes on her, Rory, and Richard.

Trix's last appearance is in season 4, episode 14. She visits and makes fun of Emily as usual, blaming her for Lorelai's hair not being done, as well as other things. While waiting for dinner, she asks Lorelai about her business, in which she immediate learns that Lorelai is having financial difficulty. Her anger then turns on Richard, blaming her son for his daughter being a "failure". She brings up his past mistakes, and Richard finally stands up to his judgmental mother, much to the amusement of Emily and a depressed Lorelai. Trix departs on bad terms with her family. Weeeelll she was really rude to Emily the whole time so I get it.

In Episode 16 of Season 4, 2 episodes after her fight with her son, the family receives word that she died of a heart attack (which Richard suffers through twice in the series) in her own home, keeping the information a secret. While making funeral arrangements, Emily finds a letter from Trix to Richard, in which she begs him to not marry her. Realizing that Trix had never wanted her to even become a member of the Gilmore family, Emily breaks entirely, as she starts smoking and even reads a vivid novel, shocking both Lorelai and Sookie when they come to visit. Lorelai then takes over making the arrangements, and has a meltdown of her own during the process, but manages to get everything done with help from Rory. During the preparations, Lorelai and Rory also learn that Trix married her second cousin, Charles Abbot Gilmore, Richard's deceased father. We learn that Trix is 86 at the time of her death, meaning she was around 26 when Richard was born (as he is sixty going on sixty-one during this time). It's revealed from her niece, Marilyn, that she was very fond of Lorelai, and often showed off her picture, as well as prided herself on her granddaughter's independence as a single woman.

After her death, Trix is rarely mentioned or referenced in any episodes. Richard mentions Rory receiving her trust fund in season 6 when she's 25, which his mother set up for her in her first visit. Also, she is trivially referenced again in season 5, when Lorelai argues with Taylor during a town meeting about how many Lorelais he knows. 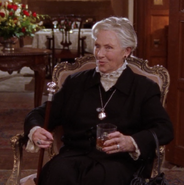