Lane was hurt when Rory developed a bit of tunnel vision in the early stages of her relationship with Dean, but they worked it out and Rory straightened her priorities.

‶Lane – Sex, is it great?
Rory – Not in front of the books, Lane
″
—Honesty and priorities[src]

Lane and Rory are fictional best friends on WB drama Gilmore Girls. They are portrayed by Keiko Agena and Alexis Bledel.

Rory and Lane met on Rory's first day of kindergarten and have been best friends ever since.[1] While they miss each other greatly after Rory leaves Stars Hollow High for Chilton[2], they remain close and spend a lot of time together outside of school. When Rory moves to Yale and spends much less time in Stars Hollow, Lane also has her first real confrontation with the difference between her passions in life and her mother's lifestyle. Rory supports Lane through this period and Lane decides to go for what she wants in life, giving her band her all, while Rory finishes Yale and sets out to see the world.

The infamous tale is that Rory was wearing the 'obscure' (read: to most people) Chico & The Man t-shirt when she started kindergarten, which had Lorelai concerned that she would have a hard time making friends. Along comes Lane, offering to share her crayons with Rory and the rest is history[1]. Their dynamic is based on humor and their common interests in literature and music[3], and they really care about each other[4]. They also seem to form a typical teenage outsiders team where they mostly spend time together and are not really popular nor spending a lot of time in groups.

‶It was so weird not having you in school today. I mean, I finally noticed some of the other kids, and let me just say, they are a sad lot.″
—Lane to Rory after Rory starts Chilton[src]

They also spend time hanging out with Lorelai, and Lane is often fed by the Gilmore Girls in trying tofu times[2]. Lorelai also provides Lane with occasional supportive teen understanding, as a pseudo-mother/big sister figure[5].

After Rory leaves Stars Hollow High for Chilton, they spend as much time as possible together outside of school, after Rory adjusts to Chilton's academic demands. But Rory's falling head over heels for Dean leaves her with a bit of tunnel vision, leaving Lane feeling brushed aside. They fight over the phone, but are cut off and later work things out.

‶Rory – I will be better from now on, I promise. Twenty-four hours a day at your disposal.
Lane – Dean'll love that
Rory – Well, he'll have to, you came first
Lane – That's right. I got dibs 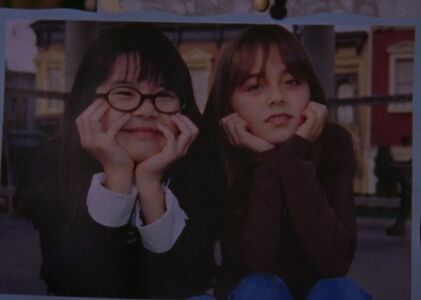