Dave went to California for college

Application Anxiety
They Shoot Gilmores, Don't They?
A Deep-Fried Korean Thanksgiving
Say Goodnight, Gracie
Lane and Dave is a romance on Gilmore Girls, portrayed by Keiko Agena and Adam Brody.

Dave and Lane first meet just after a town meeting, Dave approaching Lane in response to her drummer-seeking-band flyer. Their conversation immediately flows, both brilliant and with love for the art of music.[1] Rory even comments to Lorelai that she thinks 'a love song's in their future'. Not long after, Lane meets the other guys in the band and they start rehearsing at Sophie's Music, but Dave has to run interference between Lane and the band as they can't rehearse to loudly because of Mrs. Kim. Dave makes it clear to Lane he really wants her to stay in the band and Lane is quickly smitten with him, talking to Rory about him and calling him 'my Dave'. In frustration over her double life Lane dyes her hair purple to openly protest because of her growing feelings for Dave.[2]

The two have a great rapport and it soon becomes apparent that Dave returns Lane's feelings when he shows up at Mrs. Kim's Egg Salad Booth at the 24-Hour Dance Marathon just to see Lane.[3] 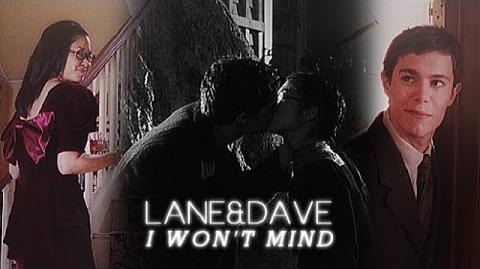 One's Got Class and the Other One Dyes