Adam Nimoy
Kill Me Now is the 3rd episode of Season 1 of Gilmore Girls.

Rory Gilmore takes up golf to fulfill a school athletic requirement and, to Lorelai Gilmore's dismay, grows fond of her grandfather when he takes her to his country club for a day on the links. The inn staff prepares for a double wedding involving two sets of identical twins.

It's the weekly Friday-night dinner with the grandparents and Lorelai is totally disgusted with her parents' attitude toward their household help. Richard and Emily don't even know the name of their own maid, which just widens the great divide between them and Lorelai. The conversation turns to Rory and when it is revealed that she needs to pick a sport to play for Chilton, Emily decides that Richard should take Rory to the country club and give her golf lessons. Lorelai freaks out, but Emily accuses her of being afraid of letting Rory go because she might have a good time without Lorelai. And that is exactly what Lorelai is scared of. Rory is headed to the country club and Lorelai is beside herself. When the big day arrives, Lorelai is busy planning a wedding at the Independence Inn for a set of spoiled rich twin girls. Lorelai says she has everything under control, but all she can do is worry about Rory. She keeps awaiting "save me" phone call, but it never comes. Meanwhile, Rory and Richard hit the green, but Richard isn't looking all that thrilled. Things go from bad to worse when Rory takes her first swing and takes a big chunk out of the grass. As for Lorelai, she is looking for sympathy from Sookie and is making a big deal out of Rory's day. Clearly, Lorelai believes her daughter will have a miserable time.

Back at the club, Rory and Richard are warming up to each other. It helps that Rory actually hit the ball, even thought it did go into the water. Rory asks her grandfather what he does for a living and the two begin to bond even more. With his job, Richard gets to travel, which is something Rory really wants to do. When Rory graduates from high school, she and Lorelai are going to go backpacking through Europe. Richard thinks that is a fabulous idea and is enjoying himself so much that he invites Rory to have lunch. That night, Rory and Lorelai meet up at the local diner. Lorelai wants to know all about her daughter's golfing adventure, but Rory's answers do not exactly sit well with mom. In other words, Lorelai just can't deal with the fact that Rory had a good time with her grandfather. This leaves Lorelai feeling a bit jealous. When Richard calls for Rory the next day, Lorelai can hardly contain her envy. She watches her daughter on the phone and realizes her daughter's getting something that she never got from her own dad. Turns out, Richard just called to tell Rory he found a book they were talking about. The next thing you know, Lorelai's picking a stupid fight, making Rory realize her mom's jealousy.

Lorelai knows she is being totally irrational but can't help it. Sookie points out that she is jealous because her own parents like Rory better than Lorelai. Ultimately, Lorelai ran away from her privileged life and it never occurred to her that Rory might want it. If the country club life is what Rory wants, then what can she do? The twin wedding goes off without a hitch and Lorelai tries to make peace with Rory. In the end, she admits that it was hard to see Rory bond with her grandparents.

❝ Lorelai – I told her she should go out for the debating team
Rory – It's not a sport
Lorelai – It is, the way the Gilmores play ❞

we are family | SISTER SLEDGE
the wedding 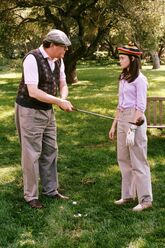 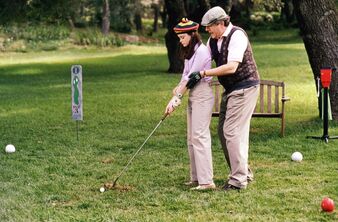 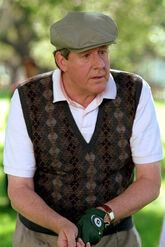 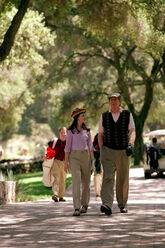 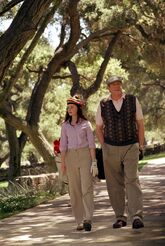 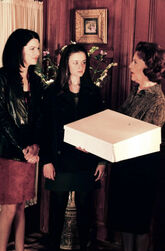 Emily – If Rory goes and has a good time without you, then I win.
Lorelai – Okay, Bob Barker.

Lorelai – I'd rather get my face surgically altered to look like that lunatic rich lady with the lion head than go to the club with you.

Lorelai – (to the brides' mother) Why don't you go up to your room and have a fabulous bubble bath and I'll send up some wine and a masseuse who bears a remarkable resemblance to Antonio Banderas.

Michel – (to Lorelai) To me you are the teacher in the Charlie Brown cartoon.

Lorelai – (upon seeing the two sets of twins) It's like a really snooty Doublemint commercial.

Emily – There you go. Now you look just like Tiger Woods.
Rory – Wow, that's some hat.

Drella (to Michel) – Hey, Pepé le Pew, you wanna give me a hand with this?

Rory – It's a conspiracy.
Richard – It's Peyton Place.

Lorelai – So, you know what I was thinking?
Rory – That Madonna and Sean Penn should get remarried?