watch 01:29
Wiki Targeted (Entertainment)
Do you like this video?
Play Sound

I Get A Sidekick
Out Of You

Amy Sherman-Palladino & John C. Flinn III
I Get a Sidekick Out of You is the 19th episode of Season 6 of Gilmore Girls.

LANE GETS MARRIED — On the night before Lane (Keiko Agena) and Zack (guest star Todd Lowe) get married, Lorelai (Lauren Graham) and Rory's (Alexis Bledel) plans for a bachelorette party go awry, as do the plans made by Zack's buddies, so the two groups end up together for a makeshift party in a vacant parking lot. Mrs. Kim (Emily Kuroda) informs Lorelai that she cannot attend Lane's wedding without an escort. Since Luke (Scott Patterson) is still out of town, Lorelai invites Christopher (David Sutcliffe) to be her date. Everyone attends two wedding ceremonies — one Buddhist and one Seventh Day Adventist — followed by a wild wedding reception in the town square.

Christopher buys Rory a Sidekick. Lane and Zack get married. Because Lane's grandmother is a devout Buddhist, they hold two ceremonies—a traditional Buddhist wedding at the Lane household and then a Christian wedding at the church. Luke is with April on her class trip and Michel gets tickets to a Céline Dion concert at the last minute, so Lorelai must attend the ceremonies with Christopher at Mrs. Kim's behest ("An unmarried woman of a certain age, unescorted, wearing the clothes you wear, people will think things—bad things!"). At the wedding's afterparty, Lorelai embarrasses herself after several shots of tequila, drunkenly toasting the newly married Zack and Lane. During her speech, she laments that "Even when I have a man, I'm still the girl who doesn't have a man." The evening's festivities come to an abrupt end for Rory, who receives a call from the hospital: Logan has been severely injured. 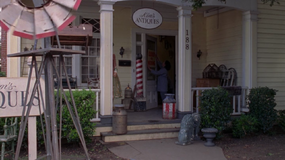 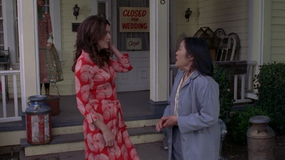 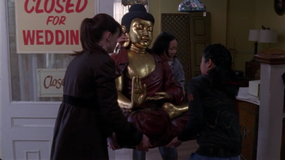 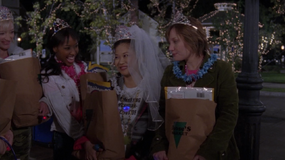 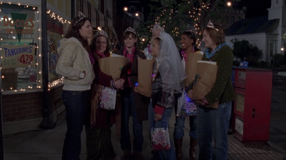 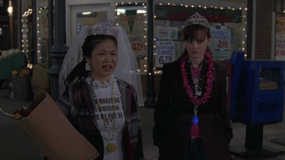 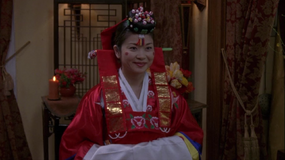 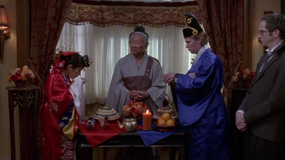 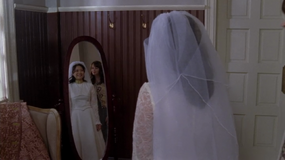 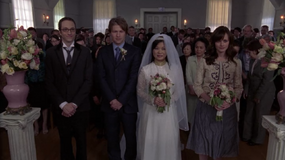 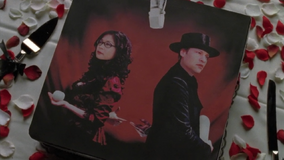 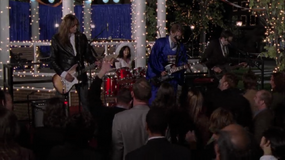 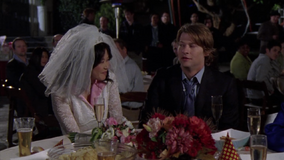 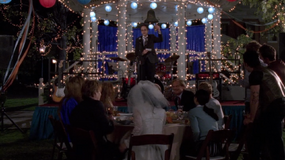 Paris – Remember Professor Leavers? He got tenured and lost all interest. Just sat there dowie and sleepy – it was like being taught by Jimmy Kimmel.

Michel – I know what, but you are going to be with me, and I'm going to look fantastic, and you know that who you are with is always a reflection of yourself, and I don't want my reflection to look like Judy Garland: the Mark Herron years.

Lorelai – Alright, gimme that. Um, okay. "Your daughter is about to see Richard Gere's penis."

Lorelai – She instructed me to bring a man today. I just wanted to show her that I can take direction well. You never know who knows Spielberg.

Lorelai – Because an unmarried woman, alone, of a certain age, dressed the way I dress apparently is Korean for Jenna Jameson.

Christopher – Is the Dalai Lama coming?

Lorelai – You know, I remember the day I met Lane. It was Rory's first day of kindergarten, and she insisted on wearing my Chico and the Man t-shirt, which I thought would either elicit confused shrugs or label her as a weird '70s sitcom kid.

Rory – You erase every picture I take of you.
Lorelai – No, only the ones where I look like Rhoda.

Christopher – Alright, Calamity Jane, let's get you to bed.

Retrieved from "https://gilmoregirls.fandom.com/wiki/I_Get_A_Sidekick_Out_of_You?oldid=36650"
Community content is available under CC-BY-SA unless otherwise noted.