5 October 2000 – 15 May 2007, 25 November 2016
Gilmore Girls is an American comedy-drama series created by Amy Sherman-Palladino, starring Lauren Graham and Alexis Bledel. Gilmore Girls has been available to stream on Netflix worldwide from 1 July 2016[1].

The show follows single mother Lorelai Gilmore (Graham) and her daughter, also named Lorelai but who prefers to be called Rory (Bledel), living in the fictional town of Stars Hollow, Connecticut. This is a town filled with colorful characters, which is located approximately 30 minutes from Hartford, Connecticut. Ambition, education, and work constitute part of the series' central concerns, telling Lorelai's story from pregnant teen runaway and high school dropout to co-owner and manager of the Independence Inn.

Rory's transition from public school to the prestigious Chilton is similarly followed, exploring her ambition to study at an Ivy League college and to become a foreign correspondent. The show's social commentary manifests most clearly in Lorelai's difficult relationship with her wealthy, appearance-obsessed parents, Emily and Richard Gilmore, and in the interactions between the students at Chilton, and later, Yale University.

Gilmore Girls is an American TV series created by Amy Sherman-Palladino and her husband Daniel Palladino, starring Lauren Graham (Lorelai) and Alexis Bledel (Rory) as a mother and a daughter who are more friends than mother and daughter and who both dream of pursuing satisfaction in their love relationships and their careers. The show mixes the drama and comedy genres and presents a wide range of emotions, characters and situations. Although apparently the target audience seems the female genre, the series explores the male universe as well with the important characters of Luke (Scott Patterson), Jess (Milo Ventimiglia), Logan (Matt Czuchry), Christopher Hayden (David Sutcliffe), thus it has been appreciated also by male audiences.

The series counts 7 produced seasons and a total of 153 aired episodes. Plus one unaired pilot where the characters of Sookie St. James and Dean Forester were played by different actors (Alex Borstein, who later played the harp player Drella and the Gilmores fashion consultant Celine, and Nathan Wetherington).

From season 1 to season 4 the show was shot and presented in the traditional TV format, while season 5, 6 and 7 were shot and aired in a Widescreen format. Except the pilot episode and a few other episodes in season 1, which were partly shot on location in Canada, the whole series was shot in Hollywood on set. The hills that can be seen in the background from time to time are nothing but those of Mount Hollywood.

The show used an overall homogeneous, real world, naturalistic visual style, although the later seasons have gotten darker and more theatrical - more rich also in set elements and decorations, especially in the Gilmore Mansion, to go with the larger scale format -, in season 6 and 7, the slightly different color palettes and the lighting mirrored the change of the series tones: Lorelai's house got redecorated and expanded, thus it showed a different kind of lighting, accompanied by brighter and more feminine tints. The overall look and feel though was definitely not so bright, as Lorelai and Rory's lives... This was stressed by emotional, dramatic scenes characterized by darker and gloomier lights and colors. Following creator Amy Sherman-Palladino's directives for the DVD release of the series, "Gilmore Girls" was published in the traditional 4:3 TV format - the 1.33: 1 aspect ratio - completely from season 1 to 7, also cutting on the use of the modern 5.1 surround audio format.

Pop and cultural references to go with a speedy exchange of witty, sometimes incomprehensible dialogues between every character, are what makes the style of "Gilmore Girls" unique though. Another feature that characterizes the style of the series is a specific taste for the old and retro in general: from TV shows, movies to music, from costumes and set decorations, there is a choice in things that don't exactly look like the world of today and the world the other comedy TV series usually depict.

We know that the Palladinos made a homage, with the quick dialogues everyone have, to the whole classic movie genre made of black and white pictures where actors engaged in super-speedy conversations (a direct homage is depicted in the episode Say Something, but also visual gags recalling screwball comedies back from the 30s or even before (for instance, we unexpectedly learn that Rory has a thing for the old movies of the Marx Brothers; she organizes a Marx marathon with her friend Marty in a season 5 episode).

We know that Lorelai likes the 80s movies (she shows some new millennium kids an old John Hughes movie with Molly Ringwald, "Pretty in Pink", in the episode Super Cool Party People and references many times the cult "Breakfast Club", by the same director) as much as those dreamy musicals from the 50s-60s (as in 'S Wonderful, 'S Marvelous where "Funny Face", starring Audrey Hepburn and Fred Astaire, is the movie Christopher screens privately for Lorelai on a farm's wall their first date together since High school).

The emblematic Luke-Lorelai-Chris triangle of the series is also subtly mirrored in the final scene of episode Introducing Lorelai Planetarium with the introduction of a sequence from the movie "The Philadelphia Story" which Luke watches on the hospital TV soon after he discovered Lorelai's instant marriage with Christopher, an event that contrasts his original plans, made at the 7th season's beginnings, to marry Lorelai while taking a flight to Maryland - which is a situation depicted similarly also in the above mentioned George Cukor film, also starring Katharine Hepburn, an actress Lauren Graham has often been compared to by critics and fans.

In contradiction to that old-vibe, from season 4 till the end, the distance between Lorelai and Rory caused by Rory's life in college and at her boyfriend's apartment has determined also a very modern style depicted through mobile and non-mobile phone-dialogue scenes between mother and daughter that have kept the bizarre and witty style they had when they still lived together and talked live. An over-the-top use of phones was shown in episodes where the characters kept driving their cars or other vehicles (like a bicycle in episode It's Just Like Riding a Bike) while calling each other, or when more than two (sometimes also four) characters entertained a conversation on the phone, with obvious comical results.

The seventh season's production was taken by David S. Rosenthal, who had already worked on "Gilmore Girls" the previous season with the original creators, the Palladinos, who left the production officially for differences with the CW network at the end of season six over issues about whether renewing their contracts or not. Off the record, it was said that the relationship between the Palladinos and Rosenthal was optimal on the sets. Rosenthal was also a writer previously in the series and he definitely was the best person who could replace the Palladinos. Although the production didn't mention anything about continuing the work on the series while the last episodes were being produced because it was almost sure they would have come back after the summer for a new season, the narrative arcs of the series during its last season were fully explored and the more the final episode was coming near, the more the writers and producers, including Lauren Graham who portrayed the character of Lorelai, felt the need to give the series a sense of closure no matter what.

The actual reasons behind the failure in the negotiations between the Warner Bros. production company, the CW network, the series producers and the series star names to produce an eighth further season of "Gilmore Girls" are many - the main was a money and salary issue -, all of them kind of surrounded by an aura of mystery. Thus, up until shortly before the produced series finale, it was unclear to many if the show would get another season. This fact had a great impact mainly on the fans but also the cast, who were kind of taken aback when they learned that they weren't gonna go back to working in the series by the end of the summer. Many fans, who were enraged by the unannounced cancellation, saw this finale as unsatisfying and - in worst cases - incomplete. Actually, all of this is the result of a particular feature that characterizes the episode final scenes and, for that matter, the whole series: the imaginativeness. Most people were left puzzled by it because the way the whole final sequence of season seven was written and directed leaves a major detail - Lorelai and Luke's future wedding plans - up to the audience's ability of interpretation (read the "Lorelai Gilmore's character profile" to have an insight on this matter).

Lorelai Gilmore is the name of three characters in the Gilmore Girls series. The series name is derived from the younger two of the three and each of the characters was named after their elder (expect Trix).

FAMILY GUY Lorelai and Rory are depicted talking really fast and end making out with each other.

TV: We now return to "Gilmore Girls".
Rory: Mom, I need to talk to you about Dean.
Lorelai: Which Dean? Howard Dean, James Dean or Jimmy Dean?
Rory: Uh, too old, too dead and too fattening.
Lorelai: You don't have to tell that to my thighs.
Rory: Can you ask your thighs if they borrowed my Gap Capris?
Lorelai: They did not and are insulted that you'd ask such a thing.
Rory: As insulted as Kitty Kelley when people accuse her of taking liberties with her best selling tell-alls?
Lorelai: Almost. Wanna make out?
Rory: Absolutely not.
Lorelai: Oh, you are so lying.
Rory: I so am.

In another episode, Stewie Griffin claims to have a three-episode guest starring role on the Gilmore Girls as "Rory's motorcycle-driving boyfriend".

Rory: Hi, Mom.
Lorelai: Rory. Prodigal daughter. Fellow sister. Soul mate. What are you doing back from college?
Rory: We all have dirty laundry in our past. As it turns out mine is in the present. No doubt in the future. But soon, your Maytag willing, once again in my past.
Lorelai: See, now, I would have laughed, but I'm not sure what you said is actually funny.
Rory: Anything said quickly can seem wittier than it is.

Wallace: "What?"
Veronica: "I'm just trying to figure out which Gilmore Girl you are."

In the pilot of The Morning Show two weekend anchors are waiting in the queue outside the Lyceum (a Broadway theater) to see an imaginary Gilmore girls musical.

Daniel: I do everything right. Everything they’ve asked me to do in the last three years. They just don’t know what to do with me. And they’re making us see this popcorn shit? Fucking Gilmore Girls: The Musical? Is the world so bereft of new ideas—

Alison: Don’t act like you didn’t know what The Twist was gonna be. I was in that meeting too. You didn’t have a gun to your head.

Daniel: Why did I get a Masters in journalism? What’s the point of having a PhD in political science?

Alison: Is this what Gabe comes home to every night?

Daniel: They’re just making me jump through hoops watching the fucking Gilmore Girls sing about how tough upper-middle class life in Connecticut is while a bunch of idiot white dudes eat expensive food on the network’s dime to discuss how to overlook me? And what the hell kinda name is Lorelai anyway?

Blaire Waldorf wants to get into Yale just like Rory, she binge watches Gilmore girls the night before the Yale Day, where she hopefully receives early acceptance to the school.

Roman: We heard you watching Gilmore girls all night, again.

Blaire: Oh, I am so a better fit for Yale than that Rory.

There are a few books written on the Gilmore Girls. Some are listed below. 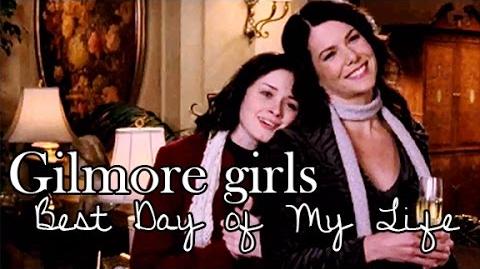