Lorelai, Sookie, Rory, and Lane plan to attend The Bangles concert, but when Lane's mother finds out the truth, she bans her from going. Lorelai and Sookie offer up the three tickets so Rory can take Madeline, Louise, and Paris which backfires when Madeline and Louise take off with two mysterious boys for a party. Lorelai learns about Luke's ex-girlfriend Rachel from a long time ago.

The show begins as Rory and Lorelai are going through Lorelai's closet with the intention of finding clothes to donate to a charity clothing drive.

The problem is that Lorelai refuses to uproot her happy family of clothing, even if she is the one who helped to organize and run the whole event. It is up to Rory to take charge, use a little tough love, and grab a bunch of really old embarrassing clothes and donate them despite Lorelai's protests. Later, Rory and Lane sort through the clothes when Luke arrives to donate some of his old goods. He bails quickly, leaving the girls to make sense of all the junk. When Lorelai spots a totally great piece of clothing, a sweatshirt with rhinestones, she insists on snagging it for herself. Rory reluctantly agrees because she thinks it will just be donated all over again next year. Next, Sookie busts into the Gilmore house all excited because she got four tickets to The Bangles concert on Saturday, making these four girls very happy. At Chilton, Rory is getting the eye from Tristin in English class, but he is quickly busted by Ms. Caldecott, the History Teacher, for not paying attention. Even after his scolding, he cannot take his eyes off of Miss Gilmore. When Ms. Caldecott assigns teams for a debate, she lumps Rory in with her worst enemies, Madeline, Paris, and Louise. The three amigas are not pleased, but they have to find a place to work, so they agree to prepare at Rory's house on Saturday afternoon. Because Rory lives 30 minutes away and because the girls flat out refuse to take a bus, Paris agrees to drive. Just then, Tristin approaches and gets up close and personal with Paris, working his mojo and totally ignoring Rory.

After school, Lane and Rory must figure out a way to get Mrs. Kim to let her daughter attend the concert. Thing is, they cannot mention the words "show" or "concert". So Lane decides the best thing to do is say they are going to a play. Not quite the truth, but not a really big lie either. Lane stumbles through her request and does not get a definite answer. Things are not looking good for Lane going to the concert. At Luke's, Rory is surprised to see that he has hung a poster up on his restaurant about the rummage sale. Usually, he would refuse such a gesture, but we all know why he has a soft spot. When Lorelai comes in she is not only sporting the rhinestone jacket, but there is a hideous leopard print cowboy hat on her head. Rory is a little concerned; her mom has got to stop buying other people's clothes. When Luke spots Lorelai, he suddenly—and without explanation—totally freaks out over the jacket. He refuses to explain his outburst, leaving Lorelai and Rory completely confused. Outside the Gilmore house, Lorelai has a sign that reads "Rummage sale drop off here: Nothing alive or gross." At this point, the house is overrun with donations, making Lorelai rethink her charitable tendencies. Especially when Miss Patty arrives with some drums appropriate for a marching band. (Patty danced on them in the Copacabana in 1969.) Anyhow; Lorelai is not impressed or interested. Inside, Patty spots the rhinestone jacket, and the mystery is solved. It once belonged to Luke's ex-girlfriend, Rachel. She broke his heart five years ago. How exactly did this juicy tidbit of information get past Lorelai? She was busy being a single mom. Wow, Luke had a girlfriend and Lorelai looks intrigued. No wonder Luke was so mad seeing her in the jacket.

When the three amigas arrive to study, the girls have little to say and stand gawking at Rory's digs. They set up shop in the living room; Louise cannot keep her hands off all of the clothing, Madeline keeps asking Rory about Dean, and Paris just wants to get down to business. Lorelai is now digging for dirt about Luke and his ex-girlfriend. Sookie tells her that Rachel was an amazing and adventurous girl and Luke was crazy about her. Unfortunately, Rachel thought Stars Hollow was too small and Luke on the other hand, would never leave the town. Like a dictator in training, Paris is busy giving orders, but Rory strays from the subject at hand to tell Madeline and Louise about The Bangles concert. The two girls can hardly believe Rory would go to a concert with her mom; they clearly are not that close with their own respective mothers. Madeline is just fascinated; it is almost like having a big sister. Paris is now going out of her mind because no work is getting done at all. Rory bails for a second to give Lorelai an update on the situation. Maybe this means Rory is making friends, with Madeline and Louise at least. So, when they find out that Lane actually told her mom the truth (which means she cannot go to the concert), Lorelai suggest that Rory take all four of The Bangles' tickets and take the girls. Lorelai and Sookie can always buy cheap tickets at the show. When Lorelai invites the girls to the concert, Madeline and Louise are super psyched, but they both have to force Paris to go.

When they arrive at the venue where The Bangles will be playing, the girls take their awesome seats while Sookie and Lorelai go to the nosebleed section. Madeline and Louise are stoked when they find some hot college guys right behind them. (Let the flirting begin.) The Bangles take the stage and open with their first hit ever, "A Hero Takes a Fall". Madeline and Louise are not even watching; they have their backs to the band, a fact that makes Paris and Rory smile. While the band sings "Eternal Flame", Lorelai wants to know if Rachel is pretty. And, if yes, what kind of pretty? A Catherine Zeta-Jones pretty? A Michelle Pfieffer pretty? No. Sookie reports that she was an Elle McPherson pretty. Wow, Lorelai is shocked. She never pictured Luke with someone that pretty. Sookie knows exactly what is going on here. Deep down, Lorelai hides feelings for Luke. Of course, Lorelai denies it, but the lady doth protest too much. Meanwhile; Madeline and Louise ditch the concert for a party with the college dudes, and Rory is pissed. What is she supposed to tell Lorelai? After the concert, Rory and Paris are temporarily stranded. They cannot find Lorelai and Sookie right away, so the two stand around and talk. Rory wants to know exactly why Paris likes Tristin so much. Is it just because he is cute? Because there are a lot of cute guys in the world and Tristin is such a tool. But Paris says Tristin is not always a jerk and she should know, they have known each other since kindergarten. They even have a lot in common. Both Paris and Tristin have not-so-great parents and he even kissed her once (in sixth grade). Still, Rory thinks Paris could do so much better. Paris says she knows Tristin is flirting with her just to get to Rory, but something is better than nothing. Soon, Lorelai shows up and gets really mad when she discovers Madeline and Louise are missing. Since Rory knows the address of the building where the party is at, the four of them go on a mission, knocking on every door in the place. After all, Lorelai came with four girls and she plans to leave with four girls.

After knocking on several doors and coming up empty, they hear music and, bingo, party central. Lorelai comes in and kicks butt, demanding that Madeline and Louise leave pronto. Then, she gives the girls an earful, how stupid do you have to be that you would leave with boys you do not know and consume drinks when you do not know what they contain? And if that is not enough of a vocal smack-down, Lorelai promises that she plans to have a long talk with each of the girls' parents. As they bail, Paris turns to Rory and says this is the best night she has ever had. At the rummage sale the next day, Lorelai wonders if Rory has heard from any of her so-called friends. Lorelai thought she was doing a good thing by inviting those girls. Well, it was not all bad, because Paris is letting Rory share some debate time, which is a monumentally huge deal. When Lorelai spots Luke, he apologizes for his outburst over the rhinestone jacket. Lorelai says it was her fault and she wants to give it back, it obviously means something to him. He takes it and she accepts payment, free coffee.

hero takes a fall | THE BANGLES

eternal flame | THE BANGLES
Sookie and Lorelai talk about Rachel 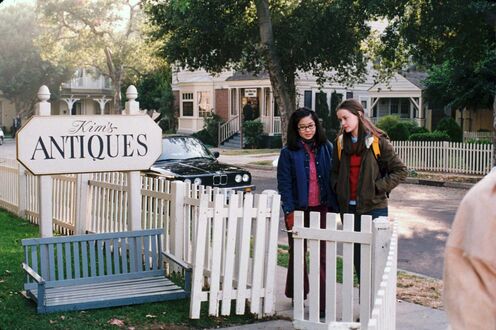 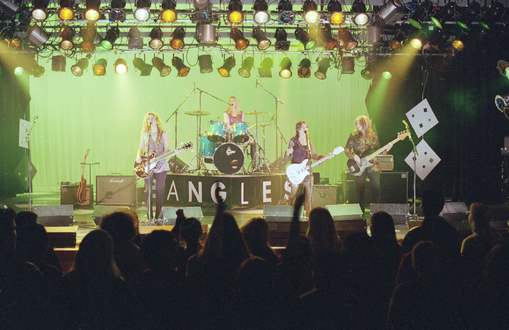 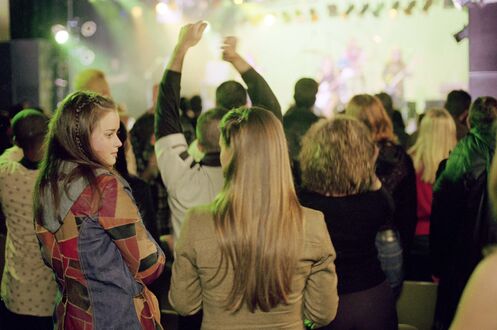 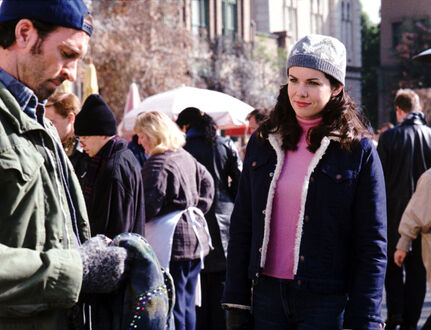 Paris – So unless you want to sit on no furniture while watching three Harvey Fierstein impersonators rip up the carpet and paint everything a ridiculous shade of white and call it 'angel's kiss' then we're going to have to find somebody else's house to go to.

Lane – All three of them?
Rory – Double, double, toil and trouble
Lane – Well, it should make for an interesting afternoon.
Rory – With the pricking of my thumb, something wicked this way comes
Lane – You're doing very well in the Shakespeare class, aren't you?

Lorelai – What hat?
Rory – The one on your head, Annie Oakley

Louise – So how good of a kisser is Paul Bunyan anyway?

Sookie – She loved to climb things and fling herself off of cliffs and dive into these really tiny lakes and ride big wild horses and fly planes.
Lorelai – So she was Wonder Woman?

Paris – And before it's dark, they'll have every picnic basket that's in Jellystone Park.