But I'm a Gilmore!

But I'm a Gilmore!

Michael Zinberg
But I'm a Gilmore! is the 19th episode of Season 5 on WB drama Gilmore Girls.

RORY MEETS LOGAN'S FAMILY – After Rory (Alexis Bledel) tells Logan (Matt Czuchry) that she can't have a casual relationship with him and they should go back to being just friends, she is amazed when Logan insists he is ready to commit to her. However, when he brings her home to meet his powerful and intimidating family, Rory is shocked by his parents' negative reaction to the relationship.

The following day, Logan's father (guest star Gregg Henry) apologizes to Rory and offers her an internship at one of his newspapers. Meanwhile, when Sookie (Melissa McCarthy) is put on bed rest by her doctor, Lorelai (Lauren Graham) calls Luke (Scott Patterson) to fill in as the substitute chef at the Dragonfly Inn.

Rory finally realizes that she's not a casual dater and tells Logan that she wants to be friends. He surprises her by suggesting they become a couple instead; while she's certainly fine with that plan, his family may not be. Luke fills in as Head Chef at the Dragonfly Inn while Lorelai looks for a temporary replacement for Sookie, who must remain in bed for the rest of her pregnancy. Sookie doesn't like losing control of her kitchen and interferes with Luke. Paris learns the real reason why Doyle hasn't returned her calls lately. 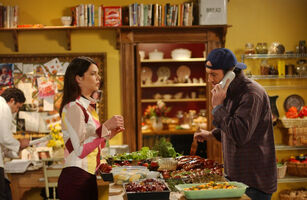 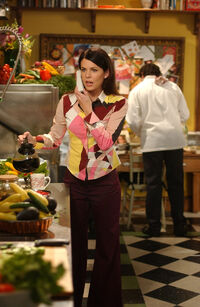 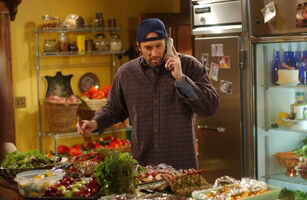 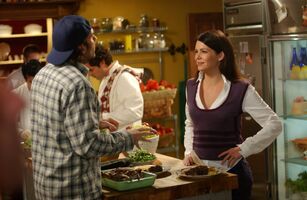 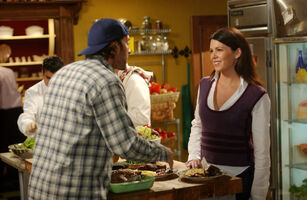 Paris – Stop saying the word vomiting, unless you want a Mr. Creosote situation on your hands here.

Doyle – Oh, God. Do you remember when Han Solo finds Luke Skywalker in the snowstorm and he cuts open their dead Tauntaun to hide inside? That's what I smell like at this moment.

Sookie – Huh. They're around somewhere. Check the freezer. Sometimes I like to read in there.
Lorelai – That's very Lucy of you. I'll call when I find them. Now rest. Bye.

Luke – And it will be here waiting for you when you get back. Until then, sit back, relax, and watch Ellen dance around a little. I got work to do.

Paris – I don't believe it! You did it, you landed the whale. You're Annette Bening.
Rory – I'm not Annette Bening. It was just a matter of getting him to focus on the situation.

Rory – Is that a Velazquez?

Mitchum – I remember the handshake. Reminded me of Jimmy Breslin's.