Gilmore Girls Wiki
Register
Don't have an account?
Sign In
Advertisement
in: A Year In The Life

OY with the poodles, already!

Picking up nine years after we last ​dropped in on the whimsical Connecticut town, Gilmore Girls: A Year in the Life finds each of our ​leading ladies at a major crossroad: Lorelai’s relationship with Luke is at an unnerving standstill; Rory’s budding journalism career in New York has stalled before it's even begun; and Emily’s world is turned upside down following the untimely passing of her beloved husband, Richard.

The first episode commences approximately four months after Richard Gilmore has passed away.[5] Luke and Lorelai are not married... yet – they are now engaged![6] Rory teaches at Chilton (at least part time/guest lecturing).[7] There is a musical taking place in Stars Hollow and, judging by the look of Rory and Lorelai's outifts, set in the '70s?[8]

Each 90-minute episode is named after a season, i.e. 'Winter', 'Spring', 'Summer' and 'Fall', which is also the famous chorus of Gilmore Girls title song artist Carole King's new theme song, 'You've Got a Friend'.[44]

A Year In The Life/Gallery 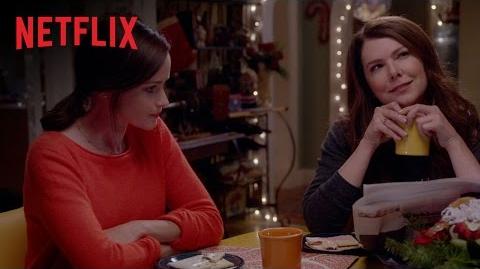 Gilmore Girls A Year in the Life - Date Announcement - Netflix

On the Heightened Sense of Privilege in Gilmore Girls: A Year in the Life (VULTURE • NOVEMBER 2016)